The Law and Legitimacy of Imposed Constitutions 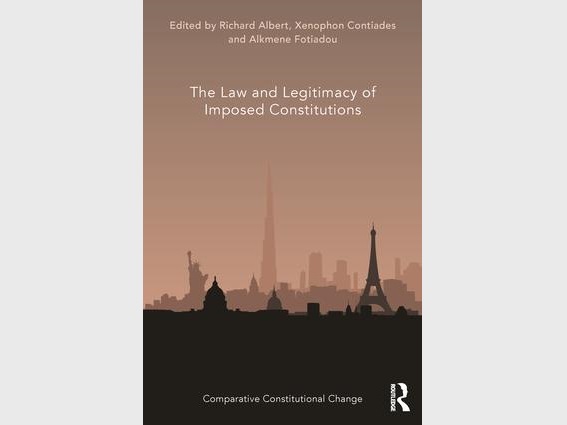 Description
Constitutions are often seen as the product of the free will of a people exercising their constituent power. This, however, is not always the case, particularly when it comes to ‘imposed constitutions’. In recent years there has been renewed interest in the idea of imposition in constitutional design, but the literature does not yet provide a comprehensive resource to understand the meanings, causes and consequences of an imposed constitution.

Part II: Forms
Chapter 5: Constitutions Imposed with Consent? – Richard Albert
Chapter 6: Are “Octroyed Constitutions” of the 19th century to be Considered as Imposed Constitutions? – Jörg Gerkrath
Chapter 7: Inter-Venire, Sed Ubi Iri?: “Imposed” Constitutions, the “Will of the People”, and the Eye of the Beholder – Zoran Oklopcic

Part III: Applications
Chapter 8: On the Priority that Publius Gives to National Security in Constitutional Design: Reflections on the Longevity of Article 9 of the Japanese Constitution – Sanford Levinson
Chapter 9: The Constituent Power of the “Imposed” Constitution of Japan: An Amalgam of Internationalised Revolutionary Power and Nationalistic Devolutionary Power – Yota Negishi
Chapter 10: The Legitimacy of Internationally Imposed Constitution-Making in the Context of State Building – Manon Bonnet
Chapter 11: A post-national legal order: Does the European Union have an imposed constitution? – Graham Butler
Chapter 12: Texts in a Time of Imposition: Lessons from Two Imposed Constitutions in Africa – James Fowkes

About the Series
Comparative Constitutional Change has developed into a distinct field of constitutional law. It encompasses the study of constitutions through the way they change and covers a wide scope of topics and methodologies. Books in this series include work on developments in the functions of the constitution, the organization of powers and the protection of rights, as well as research that focuses on formal amendment rules and the relation between constituent and constituted power. The series includes comparative approaches along with books that focus on single jurisdictions, and brings together research monographs and edited collections which allow the expression of different schools of thought. While the focus is primarily on law, where relevant the series may also include political science, historical, philosophical and empirical approaches that explore constitutional change.