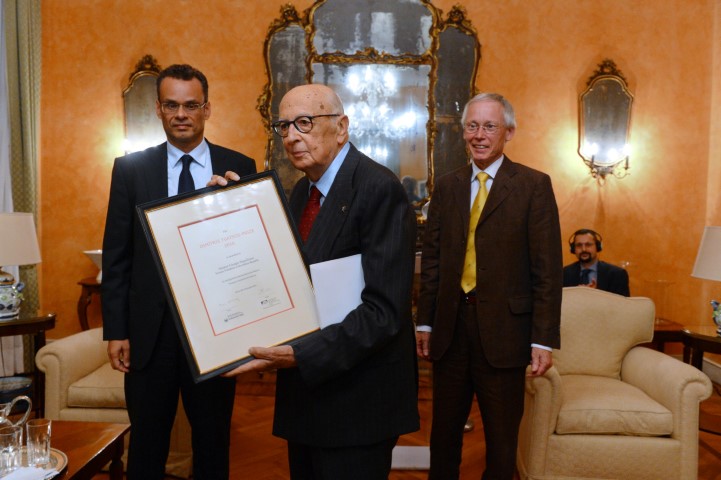 His Excellency Senator Giorgio Napolitano, former President of the Italian Republic was awarded the “Dimitris Tsatsos” Prize during a special ceremony held on Monday, September 19th 2016 at the Hellenic Embassy in Rome.

To watch the video of the evente click here

The event was held at the premises of the Hellenic Embassy in Rome. His Excellency Ambassador Mr. Themistoklis Demiris welcomed the audience and opened the ceremony.

In his address the Director of the Centre for European Constitutional Law – Themistocles and Dimitris Tsatsos Foundation, Professor Dr. Xenophon I. Contiades noted that the “Dimitris Tsatsos” Prize reflects the fundamental agony of Dimitris Tsatsos about the future of the European Integration process and comes at a time when the coherence of the European Union is severely challenged. Dimitris Tsatsos introduced the theory of European Sympolity that relies on the combination and reconciliation of the notions of cultural homogeneity and ethnic diversity as pillars of the EU institutional integration project. In this context, the bestowal of the prize to a personality like Senator Napolitano, who has made an outstanding contribution to the unification of a democratic Europe, comes at a moment that bears important symbolic significance with regard to the future of European unity.

On behalf of Dimitris-Tsatsos-Institute for European Constitutional Sciences, Professor Dr. Peter Schiffauer, referred to the importance of the contribution of Senator Napolitano to European integration.

In his laudatio, Professor Dr. Paolo Ridola referred to the unparalleled contribution of Senator Napolitano and Dimitris Tsatsos to the idea of a European Constitution as the pluralistic foundation of a common citizenship that would allow to overcome nationalistic egoisms. He also referred to the role of politics and European political parties as instruments of a supranational democracy, areas in which both personalities have been active.

Senator Napolitano in his acceptance speech recalled his relations and work with Dimitris Tsatsos at the Constitutional Affairs Committee of the European Parliament and his attitude of true camaraderie. He noted that the cooperation between the two institutions devoted in Athens and in Hagen is an example of the mutual respect and reciprocal appreciation more than ever necessary between countries equally essential as partners of the European Union. Finally, he committed to continue to put his energy at the service of the European cause, which is so seriously suffering today and which must succeed in taking the best of its experience and renewing it in a changing world context.

For more photos of the ceremony press here

September 28, 2022: The Pre-Contract Audit of the Court of Auditors

September 27, 2022: The New Provisions for Tax Determination; Taxation under the Public Health Crisis